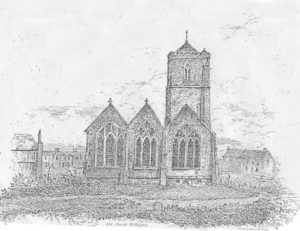 No one knows when the first church was erected in Wellington but we do know that a resident priest was recorded in the Doomsday Book of 1086. There is therefore over 900 years of church history and it is believed that it is all connected with this site.

In 1094 a charter of Earl Roger de Montgomery gives the church of Wellington to Shrewsbury Abbey. It remained a rectory in the gift of Shrewsbury, endowed with all the tithes of its parish until 1232 when the Bishop of Lichfield and Coventry united with the Abbot of Shrewsbury to share the tithes. (See page xx for the extent of the early parish)  This charter of 1232 describes the Parish Church as “the Church of Wellington under Mount Gilbert”, the Norman name for The Wrekin. In 1291 taxation records assess Wellington church to pay £6 to Shrewsbury Abbey, £10 to the Prebendage of Lichfield and £2:13:4d (£2.67p) to the vicarage.

When Henry VIII began his suppression of the monasteries this affected Shrewsbury Abbey, Haughmond Abbey and Wombridge Priory, all of which had an interest in the church. The corn tithes previously paid to Shrewsbury now passed into the Charlton family of Apley and the gift of the living passed to the Eytons of Eyton-upon-the-Wealdmoors.

In 1553 during the reign of Edward VI, commissioners were sent round to the churches to confiscate for the Crown all bells, plate and vestments not deemed necessary for public worship. There is an     inventory certifying that in Wellington the commissioners allowed three bells and two chalices to remain. The inventory is signed by “hownfre lightfoot, Wyllm Steventon, george chessire, Wyllm Doddle, hugh Phyllypes” and dated 4th May 1553. Humphrey Lightfoot was the vicar, William Steventon of Dothill and William Dodd were churchwardens. There is also a certificate dated 2nd June 1553 from the Justices of the Peace certifying that Wellington church had “iii bellys of oone accorde, and ii chalesys of silver with pattens” i.e. three bells and two chalices.

It is not known for sure whether there have been three of four churches on the site of the present church. According to Dr Cranage the church preceding the present one was built in the 14th century and may have stood nearer to Church Street.

A description in the Gentleman’s Magazine of 1758 describes the church as follows:- “It is built of rough stone covered with slate, and has a large tower steeple on the north side. It was consecrated on 1st November and dedicated to All Saints. The Church consists of a nave and two side aisles; it has a very good gallery on the west end, but the pews below are very indifferent”. The original of a drawing of the church by a Shrewsbury schoolmaster, David Parkes, is in the British Museum. The second known drawing of 1787 is by William .Pearson and this is supposed to be more correct.

This church was seriously damaged in 1644 during the Civil War when it was garrisoned at various times by both sides. At this same time Apley Castle was almost destroyed by the Roundheads.

A report that the chancel was in decay was put before the Michaelmas Quarter Sessions of 1656 and there was a dispute between the parishioners and Francis Charlton of Apley and Francis Forester of Dothill about who should repair it. In January 1657 the Court ordered “that the aisle of the church, now in decay be repaired at the general charge of the parishioners”; however, little seems to have been done. The consideration of building a new church began about 1740 and in 1748 a “brief” was issued for £3,755:14:5d (£3,755.72½) for church building at Wellington. But the money was not obtained as the “brief” method later fell into disfavour and it was not until 1788 that plans for re-building were made. The medieval church was therefore pulled down in 1789 and the only items salvaged were five bells installed in 1713.

All Saints is committed to Safeguarding and has adopted the National and Diocesan Safeguarding Policies. Our Safeguarding Coordinator is Angela Bruno and can be contacted on 07580732632